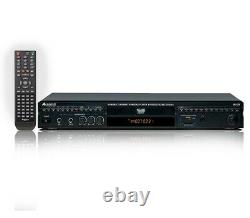 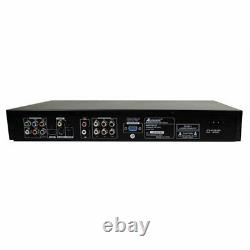 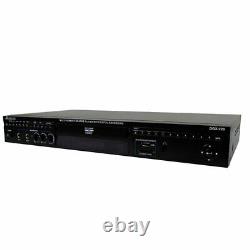 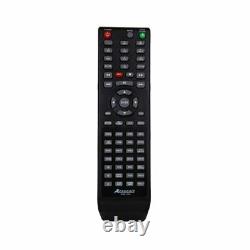 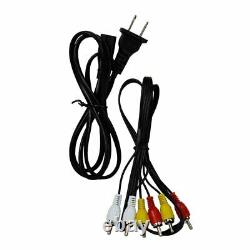 The NEW Acesonic DGX-220 carries plenty of features both new and improved. This machine will play all your discs, convert CD+G to MP3+G, play MP3+Gs, and record your performances, dictations or speeches. All these features were developed for users as we are users ourselves! One of the DGX-220's most important feature is to make the most of the MP3+G format.

Converting CD+Gs into MP3+Gs and storing them on a USB device or SD card can be done very easily and users now have the option to convert at 1x or ultra fast 4x speeds. When converting, a list will appear allowing you to check off each track you want to convert or you can also convert the entire disc. You can even record your own singing into an MP3+G file.

A very convenient feature is that you can playback the last recorded song with just a push of a single button. The DGX-220 can even generate a song list with a number for all your tracks after you've finished converting and recording.

To further improve its recording function, Acesonic brings in a large memory buffer to avoid skipping when recording and you can also record without playing a disc. This is useful when you want to record a dictation or speech! You also have the option to record using many sources such as from your CDs, VCDs, CD+Gs, MP3+Gs, or AVI files (AVI audio track must be encoded in MP3). One of the main focuses was to create a machine that is even easier and more convenient to use.

The DGX-220 has a headphone jack built-in so you can listen to all your media in private right from the front panel. Multiplex and audio tracks are even easier to switch to and from as well which can be done just by the push of the "multiplex" button.

All these features are now built into a professional quality case for durability and long life. The DGX-220 supports up to 5,000 songs on a USB drive or SD card. Simply plug in your storage devices and the machine will load them up faster than before since it now utilizes USB 2.0. An HDMI port is also built-in and both surround sound and microphone audio are all sent through the HDMI port to help simplify connections. This is the only player on the market to have this feature utilizing both HDMI and microphone audio together! Other players would require a mixer or second connection to use HDMI and microphone audio together which can be both a hassle and expensive. Digital Recording - This totally independent feature can record your speeches or dictations without needing to have a disc playing. You can also record singing along with audio and lyrics essentially creating an MP3G with you leading the vocals! Playback recordings with a push a button and easily see if your timing is in sync with the words on screen. Headphone Jack - Built-in to the front panel so you can listen to your tracks privately. Professional mixer - Built-in professional mixer greatly improves sound quality. Full MP3G Support - With MP3G becoming the new standard for karaoke because it is easy to store and transport, the DGX-220 will play MP3+G from CDs, DVDs, memory cards, or USB drives. Supports up to 5,000 MP3Gs. CD+G to MP3G Converter - Go digital! Convert all your CD+G discs into MP3G and store them on SD cards, external hard drives or USB flash drives. Simply place your CD+G into the disc tray and encode directly to your storage device. You need only check off the tracks or the entire disc. Back Up CD to USB Drive CD+G to MP3G - Capture a CD+G disc to MP3 or MP3+G at 1x or the faster 4x speed and save you over 75% of capturing time. Also known as "Ripping" refers to copying the contents of a CD/VCD/DVD to the hard drive of your system. Song List Creator for Jukebox Function - The DGX-220 will scan the entire drive and create a text file containing song information and a song number. You'll just need to punch in the song number to play a song and you can print out the song list through you PC. HDMI Port - Allows 1 connection from player to your TV for both audio and video, including microphone audio. You can turn any HDMI Monitor into a karaoke screen.

Sending audio signal digitally, you are getting the best sound quality without any interference. MIC Audio through COAX & Optical Output - The only player to output microphone/vocal audio through COAX & Optical outputs eliminating the need for complex settings or connections. Play Last Recorded Track - Just push a single button after recording to playback. No more spending lots of time going through menus leaving more time to record. Full 1080p - Pictures are displayed as clear as possible up to 1920x1080 resolution Using the HDMI output.

Cue On Function - Player will stop at end of each track to wait for your next song selection. Multi-format karaoke player with high definition video output.

Plays most downloaded karaoke tracks that are in MP3G format. Convert CD+G Discs into MP3+Gs at 1x or 4X the Speed.